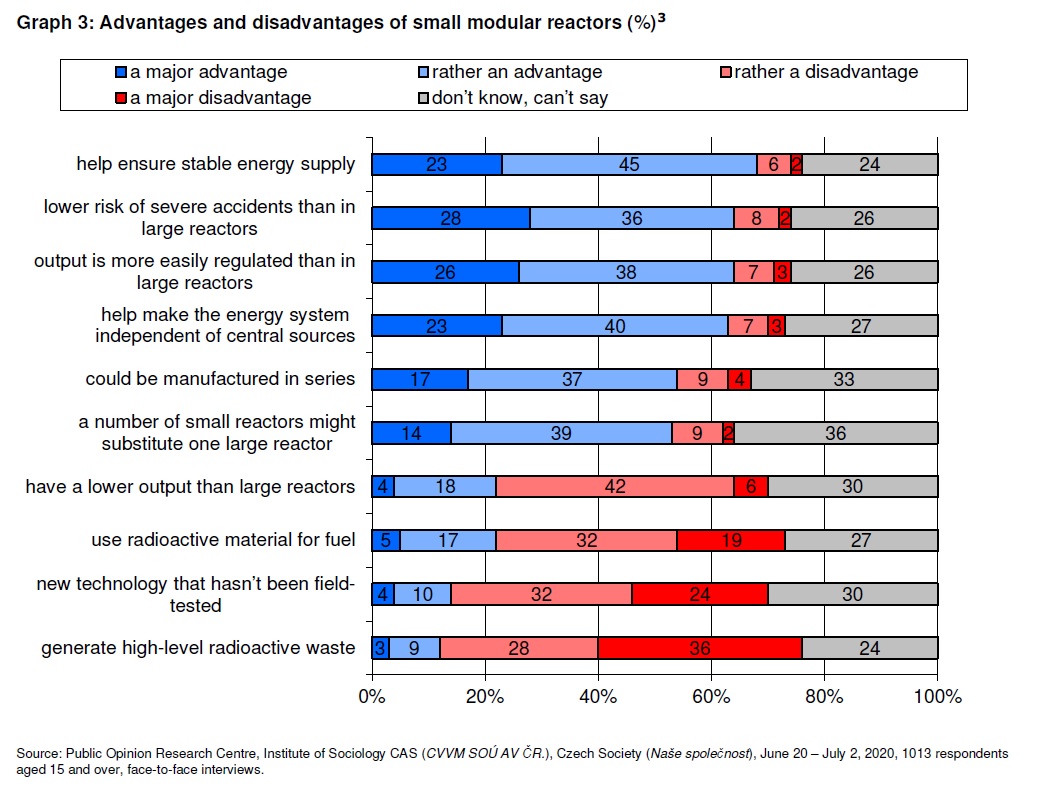 In its June 2020 survey, the Our Society series included a battery of questions on issues of energy. Within that battery, we focused on a new avenue of development of nuclear energy in the world, namely the so-called small modular reactors.

Only slightly under one-fifth of citizens have ever heard of the technology of socalled small modular reactors. 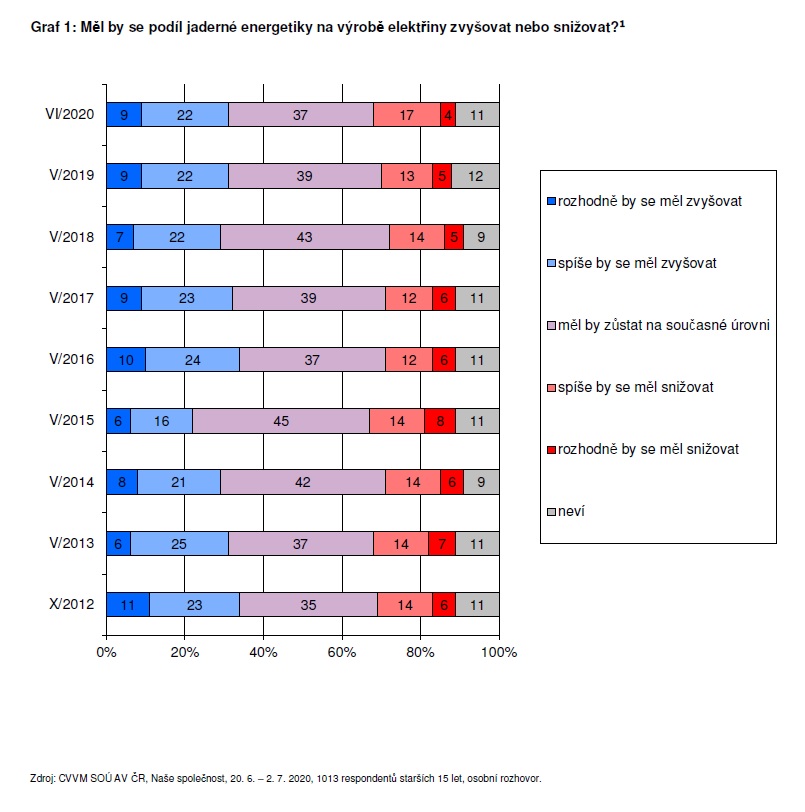 Public on Development of Electricity Consumption, and Possibility to Substitute Conventional Resources in Energy Production - June 2020

In the June survey the Public Opinion Research Centre focused on the issue of energetics. The survey dealt with a question of the future development of electricity consumption in the country, and whether or not it is possible to replace the production of electricity from conventional sources with alternative sources.

In June within the regular research the Centre for Public Opinion Research focused on the environment. Representatives of the Czech population answered questions on particular environmental phenomena in the sense of their problematic character. As the most serious problems were stated the garbage cumulation (for 65 % “very serious" problem) and the drinking water deprivation (for 62 % "very serious" problem). 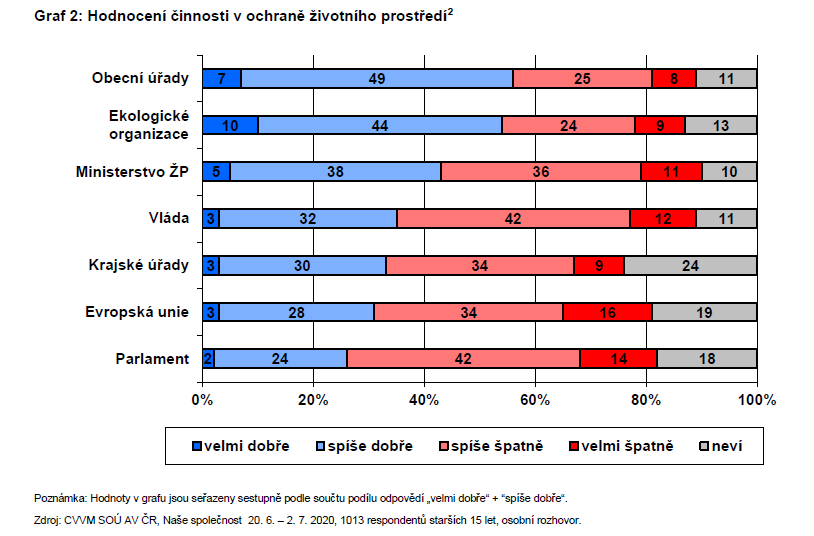 In June 2020, the Public Opinion Research Centre focused its survey on environment and its protection.

51% of respondents expressed the opinion that attention to enviromental protection in the Czech Republic is appropriate, 42% see it as insufficient. 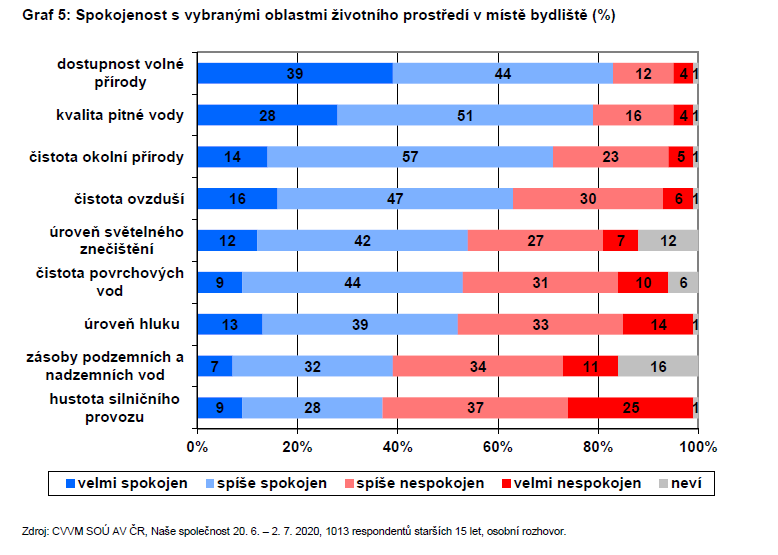 Evaluation of environment in the Czech Republic – June 2020

In June CVVM survey was focused on environmental issues. Respondents were asked about how satisfied or dissatisfied they are with the state of environment in the Czech Republic and in their place of residence. Next citizens rated the size of their satisfaction with concrete areas of environment in their residence such as cleanness of air, surrounding nature and surface water. Respondents also evaluated traffic density, level of noise and the quality of drinking water.

In October survey CVVM asked all respondents several questions concerning their opinion on climate strikes, the so-called Fridays for Future, which is also the name of movement under whose heading these protests are taking place. It is an international movement of pupils and students who decided to take part in demonstrations instead of Friday school classes, appealing to politicians to take resolute actions against global warming and other climate changes. In the research, we surveyed respondents on these strikes, whether they know what they mean, whether they endorse them, whether they think it is right that young people to strike instead of school classes, or what they think about the success of these climate strikes.

Knowledge about and evaluations of nuclear fusion – May 2019

In the Our Society survey of May 2019, the annual battery of questions on energy issues was complemented with some special questions. Also included were questions on nuclear fusion as one of the potential energy sources that has long been in the focus of research by many countries and international groupings. More specifically, the survey inquired whether people have ever heard of nuclear fusion and what, to what extent they feel familiar with the topic, how they perceive the pros and cons of nuclear fusion in terms of continuing or discontinuing research into it, whether they find nuclear fusion to be a good or rather bad option to produce energy, and whether they are in favour or against the development of fusion energy in Europe.

All reports from this survey
Jan Červenka, Martin Ďurďovič  2019-09-16  Ecology

All reports from this survey
Jan Červenka, Martin Ďurďovič  2019-09-13  Ecology